The patterns of team system evolution provide a method for looking at teams from various perspectives and points in their evolution, in order to understand what is happening to them as they move through time, how they can evolve, and how they can be crafted to behave in the future. 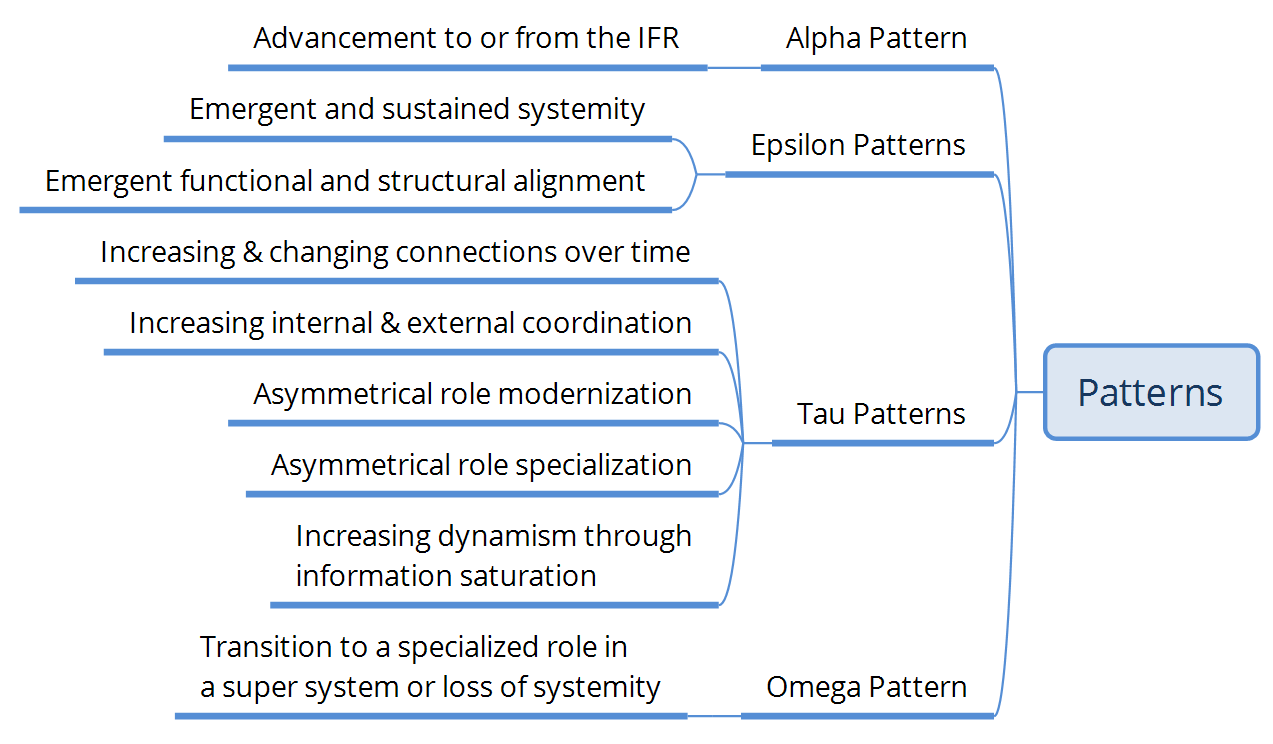 Imagine a large gathering of people in a banquet room where there are several large round tables with chairs. Over time some people sit down at the tables while other stand or walk around. Sometimes a chair at a table will have a person in it, sometimes it will not. Sometimes all the chairs at a table are full, sometimes empty. The whole-time people continue to move around, talk to each other, and sit at tables.

Over time you can notice pathways that people walk making it easier to move about the room. You notice some tables with the same people for long periods; others that no one ever sits at. It is a forever changing and evolving landscape.

With this concept, if it were teams of people organized to produce output, there would be reasons for why people are sitting at one table or another, and reasons for why someone may switch tables. Over time these reasons would become identifiable patterns. While a table has people at it that team system has systemity, it exists at a point in time as a system.

These patterns have an evolutionary cycle to themselves that allow a person to predict logical next steps. These patterns fall into four categories: Alpha, Epsilon, Tau, and Omega.

2 - Alpha Patterns: Pattern of Advancement to or from the IFR

The Alpha pattern is the first pattern and the dominant pattern.

The Alpha pattern frames the overall meaning of a systems existence as teams strive for advancement in the direction of contextual ideals and prolonged existence.

3.1 - Pattern of Emergent and Maintained Systemity

It is possible to identify team systems from non-systems through the analysis of their composition. Systemity is achieved when roles are successfully organized to be able to coordinate their interactions with each other and the environment to produce output.

This coordination takes the form of:

According to the Omega Pattern, over time the team system will either achieve ideality or lose systemity. Systemity is a stable state in the short run but a transitional state in the long run. In the exceptionally long run all team systems will eventually lose systemity (people don't last forever).

Systemity is most interesting in the analysis for the insights it brings to the variety of different team systems roles that potentially exist across different parts of the system. Since there is no one-to-one relationship between roles and systems, it is highly likely that similar roles serve a variety of systems and supersystems. Identifying this relationship through analysis and being aware that it is reasonable to change roles, reuse roles, or create new roles specific to the desired output, can produce innovative and highly beneficial new team organizing solutions.

The Epsilon patterns represent the bounds of the system, defining emergent system structures and roles necessary for the system to be defined beyond the random with a focus on systemity, function, and the structure of the system.

The Epsilon patterns describe what conditions must be met for a team system to be distinguished from the randomness of a pre-system state. The two patterns concerning emergent team systems define systemity, function, and structure. As team systems move from the Alpha to the Omega system roles will mature beyond their initial requirements.

For team systems to exist they must possess the structure and function necessary to convert system inputs into system outputs. This structure must be aligned to the ability to collect and receive input data, process and transform that data, produce material output, and have control elements in place to measure and adapt to internal and external environmental variables.

When examining a team system, clearly identify that all necessary roles within the system are present and comprehensible. When examining team system ideality, identify the interactions between the system roles and look for contradictions or possible efficiencies. Look for lines of completeness and opportunities to transition in more ideal roles. Identify system roles that do not contribute to the output transformation and consider if those roles are necessary.